Best 10 Places to Settle in Canada as New Immigrants 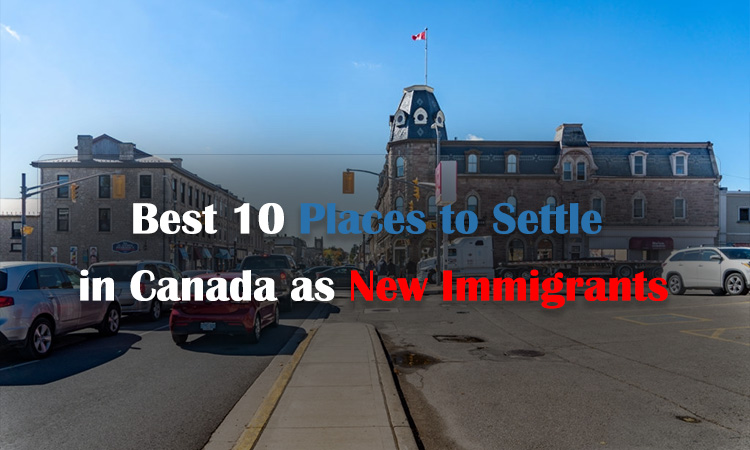 Living in Canada will definitely be a dream come true for many people. The country is not only one of the safest places to live with family but also economically enriched.

Almost every city in Canada is preferred by immigrants to settle down. Nevertheless, different cities have different quirks when it comes to permanent settlements.

A huge number of people every year across the globe set off to Canada to settle permanently. These immigrants shift there in search of a better livelihood, living conditions, and the safety of their families.

As a result, it is quite common to look for the best cities to settle in Canada, although a majority of the cities have been ranked high for a long time. Cities like Toronto, Montreal, Vancouver, and others still list the top 10 best cities to live in Canada.

But what should you look for when deciding on your preferred city? Firstly, choose the city that best suits your financial capability. We all know how tough it can be to shift to a new country and settle in.

You would want a place with a low unemployment rate and availability of jobs. Moreover, the living cost should be able to accommodate your daily, weekly, or monthly budget properly.

As a new Canadian, a proper list of the best cities to settle in will surely be of huge advantage for you. Here is a list of 10 cities ranked in ascending order with authentic and valid information.

The first city in our rank would be British Columbia and specifically Richmond. Despite being one of the costliest cities to live in, the scope of livelihood is much higher than any other city in Canada.

Richmond is a suburb of the province of Vancouver. From downtown, it is just about a 30 minutes drive. Despite being a costly city, the rent is not much higher than other expensive cities in Canada. Moreover, more than 60% of the area’s total population are immigrants who newly became Canadians.

In addition to this, the salary range is quite high in Richmond. There are also scopes to save money if you can travel through transit. Canada has a reputation for being extremely cold, with a high amount of snow. However, Richmond is one of the warmest cities in Canada. The weather will suit you and your children’s health preferences perfectly.

The second-placed city in our ranking is Calgary in Alberta. The city has been ranked as one of the most expensive cities in Canada. However, immigrants have been settling in the city for years now. The city is also one of the most immigrant-friendly than any other city in Canada.

The apartment rents in Calgary are reasonable. On top of that, the salary range and employment rate in Calgary is quite high.

As a result, you can pay off your rent and other fixed living costs easily while saving money in the process. Despite the high real estate price, the city will allow you to save money and buy a house of your own someday.

Related Article: How to Move to Canada and become a Canadian Citizen?

Burlington city in Ontario is a great place to live in for its living conditions. First of all, finding an apartment suitable for your financial capacity will be fairly easier than in any other city. In addition to this, the rent is much cheaper than even a less clean and richer city in Canada.

The city is also nearer to Toronto, one of the richest and largest cities in Canada. Burlington is much safer than Richmond as well.

The major problem you may face is the lack of immigrants in the city. If you are a great communicator, it will be easy to get accustomed to the local Canadians.

Nevertheless, with continuous expansion and cheaper housing costs, the city is expected to be filled with immigrants in the coming decades.

Markham is beside the city of Richmond Hill. Traveling to Toronto from Markham is also very easy. As a result, this city is quite favored by several immigrants in Canada.

Being the city alongside Richmond Hill, Markham has the second-highest number of immigrants. Almost half of the total population were born in a different country. Being a wealthy city in Canada, it is very safe for families to reside here.

Moreover, the apartment vacancy rate is much higher. You can easily move in and find a place to live according to your budget.

With a formidably low crime rate and half of the total population coming from all over the world, Mississauga is quite famous for immigrants to live in.

The city is the third-largest city in Ontario. Despite the size, you may have to drive here and there for the commute. Also, the employment rate is a bit lower than in other cities.

However, the lower living cost compensates for the quirks. Therefore, you can easily go by with whatever source of income you have.

Know Why Canadian Citizen Returning Canada after a Long Absence

Brossard is a suburb of Montreal. The place is heaven for people who prefer living in the cheapest apartments in Canada.

Despite being a low-rent place, finding a vacant apartment in Brossard is way easier than in other places in the country. Moreover, real estate costs are really cheap. Data shows that you can buy a house with only 3 years of saving in Brossard.

The city also has a low crime rate. The only little issue is that you may have to go through longer traffic jams than any other place in Canada.

Richmond Hill has one of the highest rates of immigrants in Canada. A city is a well-favored place for immigrants as well.

Apartment availability and employment rate in Richmond Hill are reasonable. You can live by with whatever earnings you have in the city. However, the city has one of the highest crime rates. Moreover, it may take you longer to buy a house in Richmond Hill.

The capital city in Canada is ranked fairly lower because of its weather. The city is extremely cold. As a result, you may find yourself locked at home due to heavy snow.

Nevertheless, Ottawa has lots of positives, being the capital of Canada. The place lies in the middle region in every factor of living. The living condition is moderately good.

Even though the unemployment rate is higher than in other cities, it is expected to experience a boom in the job market soon. With that, you can expect house prices to go down and easily afford an abode of your own.

Milton is a city that is expanding rapidly. The unemployment rate in the city is extremely low. Job availability in Milton is super flexible.

However, immigrants are yet to favor the city due to a bit high rent price and crime rate. Despite that, the city is growing exponentially and will be in demand to settle in.

West Vancouver is the richest city in Canada. Despite that, the rent price is perfectly affordable for immigrants. However, it will take you around 8 years of saving to own a house of your own.

Almost 30% of the total population is immigrants in the place. This is major because of the low unemployment rate. In addition to this, the weather is much friendlier and warmer than in other cities in Canada.

Canada is unarguably one of the best countries to live and settle down in. Millions of immigrants every year shift to Canada. The list of the best 10 places to settle in Canada as new immigrants can solve a lot of decision-making problems for you.

Can I stay in Canada with an Expired Visa?
Immigration and Ethnocultural Diversity in Canada
Everything You Need to Know about Canada Start-up Visa
How To Change Name In Canadian Passport
Previous Post

Pros and Cons of Living in Yukon