History of Immigration in Canada 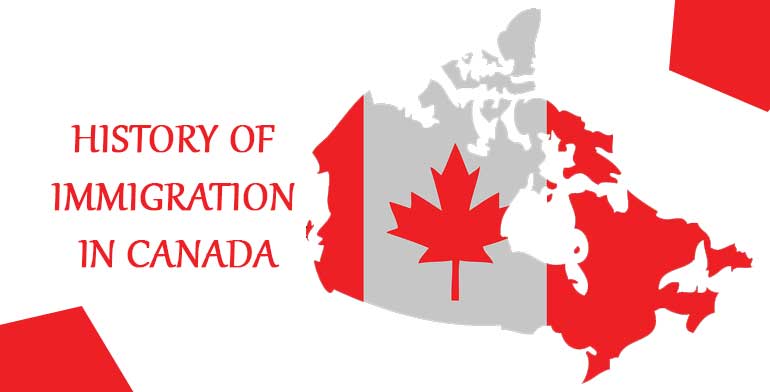 Canada is called the land of immigration. People from previous centuries are migrating to Canada from all over the world. Most of them are Americans, British, Scottish, Irish, French, Europeans, and the remainders are Asians.

At present, there are four types of immigrants in Canada. These are Family class, Economic immigrants, Refugees, and Humanitarian and other categories. Today, we will know the history of immigration in Canada and from when Canada started receiving immigrants? We hope you will find it interesting.

Different Stages on History of Immigration in Canada:

At first, Canada was under British and French colonies. After that, four main stages or waves of immigration and settlers from other countries took place in Canada over almost two long centuries. The fifth stage or wave is still happening. Now we will discuss one by one.

The First stage or wave took place over nearly two centuries slowly and progressively. In that period, French settlement came Quebec and Acadia. A fewer number of American and European entrepreneurs and British military personnel came from Mid-Atlantic states as well.

The number started with 46 and ended up with 50,000 who flew from the American revolution. All of them were British loyalists. They immigrated to today’s southern Ontario, the eastern townships of Quebec. 36,000 went to Maritimes, among them some of returned to Ontario.

The second wave of Americans arrived in Ontario between the late 1780s to 1812. The number was the same, 36,000. During this period, some of the Gaelic-speaking Scottish migrated to Cape Breton, Nova Scotia, and Eastern Ontario. It is considered as a new age for Immigration in Canada.

After the war of 1812, British and Irish immigrants inspired to come to Canada, including British Army regulars. 250,000(80%) English speakers, most of them were Americans or their ancestors migrated to Canada in 1815. 30% of immigrants had fallen by 1851.

During this period, the number of Irish immigrants was growing. The highest value was when the Irish Potato Famine happened from 1846 to 1849. More than 800,000 immigrated between 1815 to 1850. 60% were British(English and Scottish); the rest of them were mainly Irish.

Over 400,000 immigrants came to Canada in 1912 from continental Europe, Eastern Europe, and Southern Europe during World War I. This immigrants counted into the Third wave. The Fourth wave reached in Canada from Europe after World War II. The number was 282,000 in 1957.

Generally, they migrated from Italy and Portugal. Pier Halifax, Nova Scotia, played an important role in European immigration. Pier 21 accepted 471,940 Italians between 1928. After then they canceled operations in1971. But it already had made Italian the 3rd biggest group in Canada.

Britain always got the warmest welcome for immigration. But the other immigrants like Francophone immigrants didn’t get any special priority. Chinese immigrants entered Canada in 1900 and 1903. But the number was limited.

From the 1970s, a less number of immigrants started to migrate to Canada from developing countries. In 1976, the Immigration Act was passed and after that, the number was raised slightly. On February 20, 1978, Canada and Quebec sign an immigration Agreement.

According to the Agreement, Quebec can decide to select its immigrants. But they need approval from Ottawa. In the 1980s, Canada could take only 225,000-275,000 per year. When the Coalition Avenir Quebec elected in 2018, the number of immigrants reduced to 40,000.

Benefits of immigration in Canada

To get permanent residency, you have to live for at least three years in Canada. You also need some other documents to apply for Citizenship.

In generally takes six months to get the citizenship after taking the Citizenship Test and Interview.

People aged between 18 to 54 have to take the citizenship test and Interview.

Oath taking ceremony generally takes 45 to 60 mins to complete. However, the time may vary upon the number of applicants and citizens.

Yes, any Citizen who is a Canadain Citizen can renounce his citizenship status if he wants. He may apply for renouncing the citizenship under certain conditions.

The answer is yes. You can again apply to resume your Citizenship status though you have renounced it once.

The total fees for applying for Citizenship in Canada is CAN $ 630. Among the prices, $530 is for processing fee, and $100 is for the right of  Citizenship fee. But for minors aged under 18, the processing fee is $100.