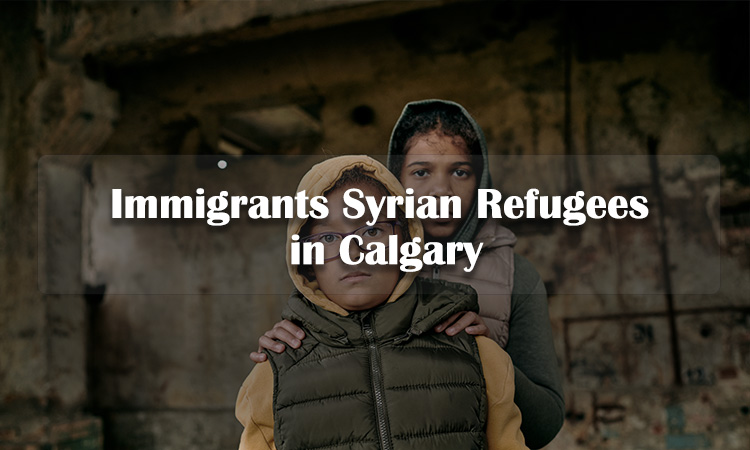 This article explains the eligibility criteria and other necessary information about Syrian Refugees In Calgary.

Newcomers from Syria can have a refugee claim if they meet the eligibility to be one. Foreign nationals who are not secure in their countries and can not return claim refuge in Canada. Canada allows them to stay, and eventually, they can apply for permanent resident and citizenship.

You can not be subject to any removal order to make a refugee claim. People outside of Canada can resettle as a refugee or choose a suitable immigration program.

Receiving a refugee status requires a determination from Immigration and Refugee Board (IRB). If someone has a record of criminality and security issues, their decision comes from Immigration, Refugees, and Citizenship Canada (IRCC).

There are two general categories:

People who do not qualify for either of these two types are eligible for protection under the Country of Asylum Class.

A person in Canada who is removed from their country or personally subjected to torture, life threats, and cruelty falls under this type.

One may be in this class if:

People who live outside of their home country can not go back because of the fear of persecution or cannot ensure their protection.

In this category, the persecution must be well-founded based on:

This category is for those who do not qualify for the Convention class. It is for the people who live outside of Canada, and their situation meets the definition of refugees.

If the immigration officer determines that the person is seriously affected by:

Then the person can go under the Asylum Class.

A reference from United Nations High Commissioner for Refugees (UNHCR) is necessary. Also, they can have the sponsorship of private organizations or have the fund to support themselves after arrival in Canada.

For a refugee claim in this category, the person must show that no place in their country is safe for them to live in.

Who is a person in need of protection:

The people in Canada who can not return to their home country safely are the person who needs protection.

They can have threats to their life when they enter the country. There can be chances of being a victim of torture or cruel punishment by others.

Who is Convention Refugee?

People who have a fear of persecution belong to this category. Persecution includes things like life threats, torture, imprisonment by the government.

A person living outside of Canada can claim a Convention Refugee status. The people who have no place to live in their country safely can ask for safe living in Canada in this category.

Getting Information and Help

If you want to claim refugee status, you need to know the required information to determine your eligibility. You can look for an immigration consultant to guide you through the whole procedure.

You can also get the information from embassies and foreign consulates in your province.

Why do refugees go to Canada?

A refugee leaves their country for various issues. Most of them come with less financial resources. They not only get a safe place in Canada but also do good for the country.

Canada is a welcoming country.

Each year Canada welcomes the Refugees fleeing for fear of persecution and war. Refugees contribute to the country head to head with the native residents.

Canada is a prosperous country and takes well care of its economy. Refugees put their commitment to the economy, and eventually, most of them climb their way up to the middle class.

They have skillsets in various branches. Among them, the business owners create employment for their fellow Canadians also.

Canada creates a safe haven for those people to live in, and in return, they contribute to the country’s development.

Canada is a country composed of diverse people. Welcoming the refugees enriches the economy and community and eventually make Canada stronger.

You may not have well protection in your country. You can have a fear of persecution or some severe effect of a war.

When your government can not protect you or feel unsecured in each corner of your country, you are welcome to Canada.

You can claim refugee status following the proper steps. First, you need to select your eligibility class and then move forward with the legal procedures.

The government is putting their resettlement effort on Syrian Refugees in Calgary by providing the support they need.

Here are a few clarifications of some of the most common questions.

Since November 4,  around 201544,620, Syrian refugees have entered in Canada. Still, more people are joining. This is an ongoing resettlement effort from the Canadian government.

What has Canada done for Syrian refugees?

Canada supports the refugees by hosting their communities and give them support in every aspect. They provide a basic income for those who do not have money to pay for their basic needs.

How many Syrian refugees are in Calgary?

The exact number is not precise as more are still resettling. The government supports settling between 2000-3000 Syrian Refugees in Calgary.

Are refugees good for Calgary?

Refugees have been contributing to the Canadian economy since their first entry. Syrian Refugees in Calgary are contributing to society with their skillset and making Canada stronger.

How to Register a Business in Calgary? [Complete Guideline]

Living in Surrey, BC